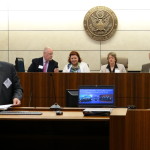 By John B. Dorris and Mariane L. Dorris

In 1996, President Bill Clinton signed into law the Defense of Marriage Act (“DOMA”). The Act was passed largely as a reaction against the belief same-sex marriage may be recognized by the Hawaiian Courts. Hawaii did not recognize same-sex marriage in 1996, but DOMA was in place to begin almost seventeen years of Federal law defining marriage as a union between a man and a woman. The recent Supreme Court decision in United States v. Windsor recognized the animus underpinning its passage declaring Section Three, which defined marriage as solely between a man and a woman, a violation of due process, federalism, and equal protection.

In anticipation of the Supreme Court’s rulings, the U.S. Bankruptcy Court in Orlando hosted a Panel Discussion presented by the Central Florida Gay and Lesbian Law Association and the Diversity Committee of the Central Florida Bankruptcy Law Association titled Is Separate the Indubitable Equivalent of Equal? on May 17, 2013. The presentation discussed the potential impact of the then upcoming Supreme Court rulings in Hollingsworth v. Perry (California’s Proposition 8), and United States v. Windsor on bankruptcy, estate planning, and tax law. The distinguished Panel included  U.S. Bankruptcy Judge John K. Olson, S.D. Florida, who had filed two amicus briefs in the Windsor matter; W. Thomas Dyer, Esq., founder and publisher of the Watermark, a Central Florida LGBT publication; Mary B. Meeks, Esq., co-author of the 2013 Florida Senate Bill, SB 196, or “Families First Act,” which would create a statewide domestic partner registry in Florida; and estate planning and transfer tax specialist Mary Merrell Bailey, Esq., CPA, M.B.A., who specializes in the needs of unmarried couples and the elderly. Civil litigator, and diversity and inclusion advocate, Larry D. Smith, Esq., served as the Panel Moderator.

The Panel began the discussion with a review of California’s Proposition 8, the Defense of Marriage Act, and the Hollingsworth and Windsor cases. The discussion included personal narratives about how DOMA affected the Panelists individually. For example, in 2010, Judge Olson married his husband in Massachusetts, and in November of that year submitted the necessary forms to participate in the Judicial Survivors’ Annuities System (“JSAS”) listing his husband as the beneficiary. The Administrative Office of the United States Courts initially accepted the premiums, yet ultimately rejected Judge Olson’s enrollment and returned the collected premiums declaring DOMA “preclude[s] survivors of same-sex marriages from qualifying for a JSAS annuity.”

The Panel further provided an historical overview of the complicated, and often byzantine, steps same-sex couples undergo when planning their estates in order to replicate the same outcomes legally married couples already enjoy. Multi-jurisdictional considerations further complicate estate planning and tax issues for same-sex couples when State legislation and city or county ordinances overlap depending upon where the property is located and the couple’s place of domicile.

The Windsor decision now requires the Federal government to recognize legally married same-sex couples. Approximately one-third of the U.S. population lives in a State recognizing same-sex marriage. Recognition of marriage is implicated in approximately 1,100 different Federal regulations and provisions. However, complicating the patchwork of rules and regulations is the method to determine whether a couple is legally married. The “rule of celebration” and the “rule of domicile” have very different implications. The rule of celebration recognizes a marriage if lawfully performed and recognized at the place of marriage. Edith Windsor, for example, married her spouse in Toronto, a jurisdiction recognizing same-sex marriage.

The rule of domicile, however, will only recognize a marriage if the couple are domiciled in a State that recognizes same-sex marriage. Edith Windsor married in Toronto, but she lived in New York. At the time, New York did not perform same-sex marriages, but would recognize marriages lawfully performed in other jurisdictions. If Edith Windsor had moved to Florida, her marriage would not be recognized since Florida’s Constitution specifically rejects same-sex marriage. If Edith Windsor, now widowed, were to remarry in New York, then move to Florida with her new spouse, any Federal Agency using the rule of domicile would not recognize her new marriage. To address this issue, members of Congress have introduced the Respect for Marriage Act (H.R. 2523, S. 1236), which would require the Federal government to adhere to the rule of celebration.

Under 11 U.S.C. § 101, the term “spouse” is used approximately twenty times, yet the term is never specifically defined nor alludes to the “celebration” or “domicile” distinction. After Windsor, in states like New York, legally married same-sex couples are spouses. While it is unclear whether same-sex couples can file joint petitions in those states not recognizing their marriage, filing a joint petition is one of many potential issues Bankruptcy Courts and practioners in Florida may encounter. For example, if a same-sex couple holds real property as tenants by the entirety (“TBE”) located in another state, does the Bankruptcy Court recognize TBE if Florida would not? Could a Bankruptcy Court in Florida recognize real property located in Florida as being held in TBE if the requisite unities were satisfied despite Florida’s ban on same-sex marriages?

Over the next twelve months the distinction between celebration and domicile will become clearer as agencies formalize their policies. The Central Florida Gay and Lesbian Law Association and the Diversity Committee of the Central Florida Bankruptcy Law Association will convene a follow-up Panel Discussion in June 2014 to discuss how the Hollingsworth and Windsor rulings changed bankruptcy, estate planning, and tax law. It is very likely the fields will see significant changes as these issues become solidified. One policy already clarified comes from the Office of Personnel Management. The Office announced it will extend federal benefits to all Federal employees, and perhaps annuitants, who have a legally married spouse. Judge Olson resubmitted the enrollment application, and he continues to await a final decision whether his marriage will be recognized despite Florida’s ban on recognizing the marriage.

John B. Dorris and W. Clevelan Acree, Coordinators of the Same-sex Panel Discussion